Some scenes capture us so completely we never tire of them. Dancing flames in a campfire for example, or the swirling froth of ocean waves. Or, in the case of Mt Taranaki, a mountain so strikingly perfect it demands admiration for hours, or even days, from all angles. It’s a case of perfect symmetry, a volcanic cone rising 2518m and caked in snow for half of the year despite being a mere 26km from the Tasman Sea. Changing conditions are forever framing it in a new light, often seeing it lapped at its base by roiling clouds or cast in gentle pastel hues from a setting sun.

It’s visible long before you reach it, gracing the horizon from the neighbouring base of New Plymouth, but getting up close is where the magic really happens. There are many ways to enjoy Mt Taranaki with dozens of trails scattered beneath and across its flanks, striated by pyroclastic flows and the 7m of rain that scours it annually. Over a four-day visit I walked a few of them, taking me on everything from cruisy paths with epic mountain views to one dramatic and lung-busting climb to its lofty summit.

North Egmont, on the mountain’s northern side, is the main access point. Here a large visitor centre offers insights on this once-dynamic region where volcanoes have risen and collapsed over millennia. Taranaki is the fourth cone to form here, around 125,000 years ago. It’s now classified as dormant – its last eruption occurred in 1755 – though ash from previous eruptions has been found in lakebeds as far away as Auckland, and road cuttings and stream banks in the park still reveal cross sections of centuries-old gravel, ash and pumice.

Egmont National Park is diverse, home to thick montane forest, waterfalls, swampland, tussock ridges and exposed scoria slopes. From North Egmont alone, more than a dozen walks branch out, ranging from wheelchair-friendly boardwalks to the four-day Around the Mountain tramp. From the east and the south, two other roads provide access to a further 20 trails.

My explorations began with the three-day Pouākai Circuit, a 25km hut-to-hut tramp nestled in the cradle between Taranaki and the Pouākai Range. After an initial, rather huffy-puffy climb to rise above the forest, there are regular epic views of the mountain, however one is particularly hypnotic. In the still waters of a tarn perched on a tussock ridge, can be seen a perfect mirror reflection of the mountain. This diamond-shaped vision of beauty is one Taranaki’s most celebrated views and is guaranteed to leave you starry-eyed.

Thankfully, for those with less time or energy, the Pouākai Tarns can also be reached via a much shorter two-hour jaunt from the end of Mangorei Rd. It’s worth noting however that a mountain of this size influences weather, and afternoons often see the summit obscured by cloud, so if you’re serious about maximising your chances for that perfect photo, book a bed at Pouākai Hut, a 15-minute walk from the tarns. The hour or so before sunset and after sunrise generally offers the clearest conditions, plus you’ll avoid the day crowds.

Another popular alternative is the one-day Pouākai Crossing, which takes in the tarns as well as forests dripping with moss and lichen, the 3500-year-old Ahukawakawa Swamp, and spectacular alpine views.

For a change of pace and scenery, head to the Dawson Falls road-end, where a 10-minute walk leads to Dawson Falls, dropping 18m across a fern-covered rock face. Also here is an easy 1.9km loop through moss-draped “goblin forest” of tōtara and kāmahi leading to the Wilkies Pools. Sculpted from 20,000-year-old lava, these pools make for a refreshing dip and are popular with families.

These abundant lower-lying trails are all stunningly good but if you’re anything like me, the lure of that soaring peak will be beckoning you like a siren song. It’s dramatic and beautiful, and to explore its rugged lines with your boots will give you a next level appreciation of the mountain. 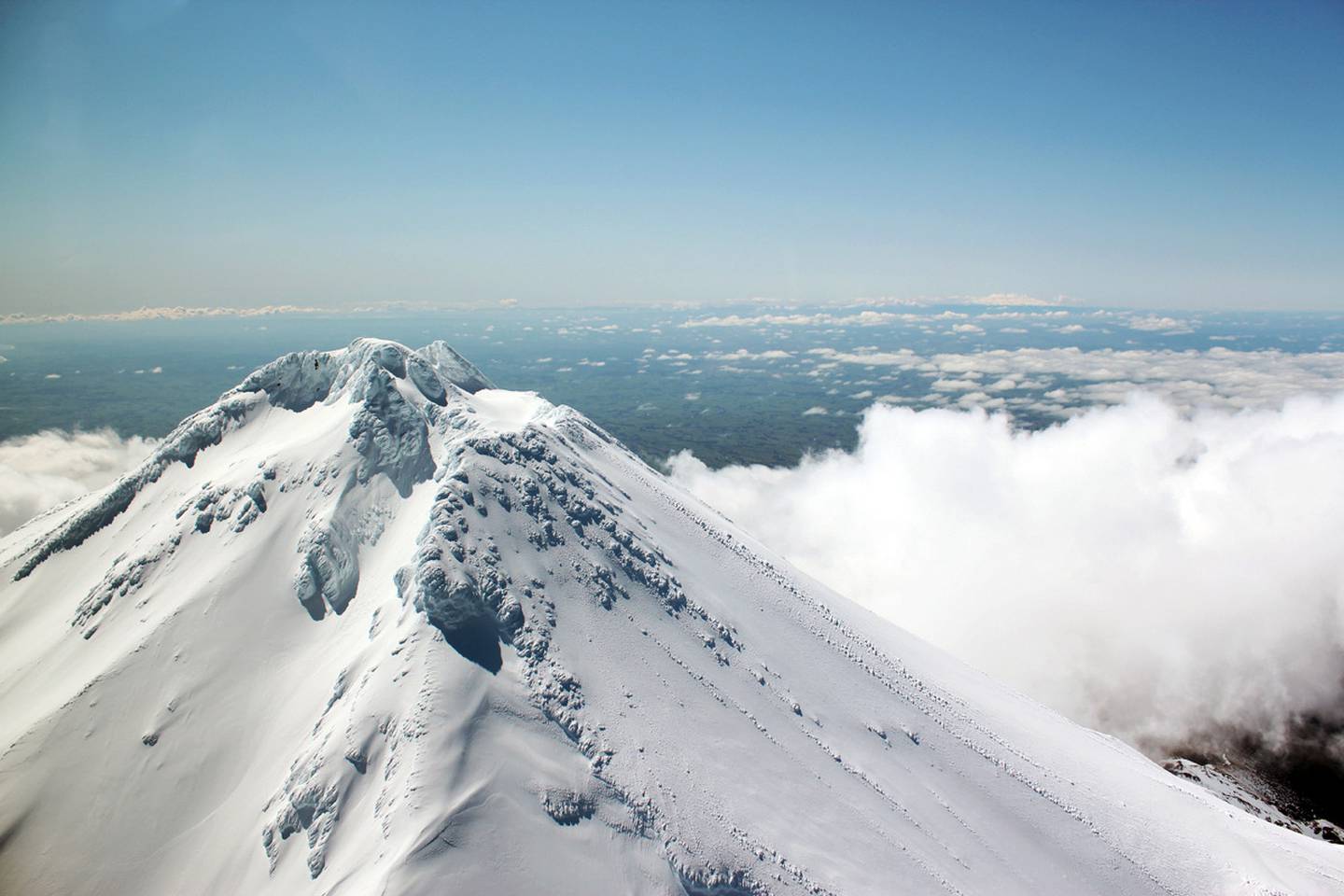 Tackling Taranaki’s summit route is for the fit and brave. A full day is required for the 12.6km return walk and virtually all of it is steep, involving an elevation gain of 1600m. It begins with a well-graded 4WD track – handy considering you’ll probably be starting it by the light of a head torch just prior to dawn – before quickly becoming more challenging. Above the tree line, trampers tackle the boulder-filled Hongi Valley and then long flights of steps before reaching a seriously steep scoria slope. Walking poles are a significant aid here, where tiny balls of rock roll underfoot like ball bearings (I muttered many a curse word on the descent.) The final phase is a rock scramble up a steep lava ridge referred to as The Lizard, before traversing the ice-filled crater and one last scramble to the summit.

It’s a serious undertaking that takes most people between six to 10 hours return but climbing those steep flanks is a perspective-changing thrill. Such a high and exposed route seems to cast you directly into the heavens and the views are like something from an aeroplane window; on a clear day you can see all the way to the South Island.

Whichever way you view it, embrace the draw of this mighty maunga and you won’t be disappointed.

Weather here changes quickly and can be extreme, so check the forecast before heading out and carry adequate clothing and supplies. January to April is the best time for a summit attempt, when the mountain is usually free of snow and ice, however, freezing temperatures can occur year-round. Start at dawn (or earlier) to enjoy the best conditions.

Taranaki Māori request you do not stand directly on the peak

Stay in New Plymouth, or book a bed inside the park at DoC’s Konini Lodge (Dawson Falls) or Camphouse (North Egmont).