# List your rental for FREE on HolidayLettings
# Check out Expedia's daily travel deals and choose from luxury to low cost hotels, holidays, city breaks and flights. Book now and save on your next trip
# Car, Home, Travel and Health Insurance, Life, Savings, Investments and Pensions
# Check out Expedia's daily travel deals
# Free & fast online ordering from restaurants across the UK with hungryhouse. Browse takeaway menus. Read reviews. Pay with cash or card for easy ordering
# Discount Hotel deals on 787860 hotels worldwide with Agoda

After 30 years at the helm of a large architectural practice, Chris van Ryn gave it all away to become a freelance travel writer. For the last 15 years he’s been exploring the world, writing stories and taking photographs for magazines and newspapers.

I was thrilled to be invited to Madagascar on a cycle tour. I didn’t study the information too closely, just saw that it was 150km all up. I had six months to prepare, so I did the numbers and decided to cycle x number of miles per week to be fit enough. Four weeks before departure, I was sent the itinerary and read it more closely — it wasn’t 150km, it was 510km. I decided to extract myself from the ride, to make up a medical disaster or say “I just don’t have time”. But my wife Audrey said, “just do it”. I was getting up at 4am to cycle all over Auckland on my old Brompton folding bike. I was wearing my tramping boots, my backpack was packed with camera gear, I was busting my arse. Physically it was much more challenging than I’d imagined but it was incredible. When you ride, you see the world in a completely different light. We cycled through villages tourists can’t easily get to and the kids would run out and yell, “bonbon, bonbon”! They wanted lollies, but instead we gave them vitamin C tablets and bamboo toothbrushes. 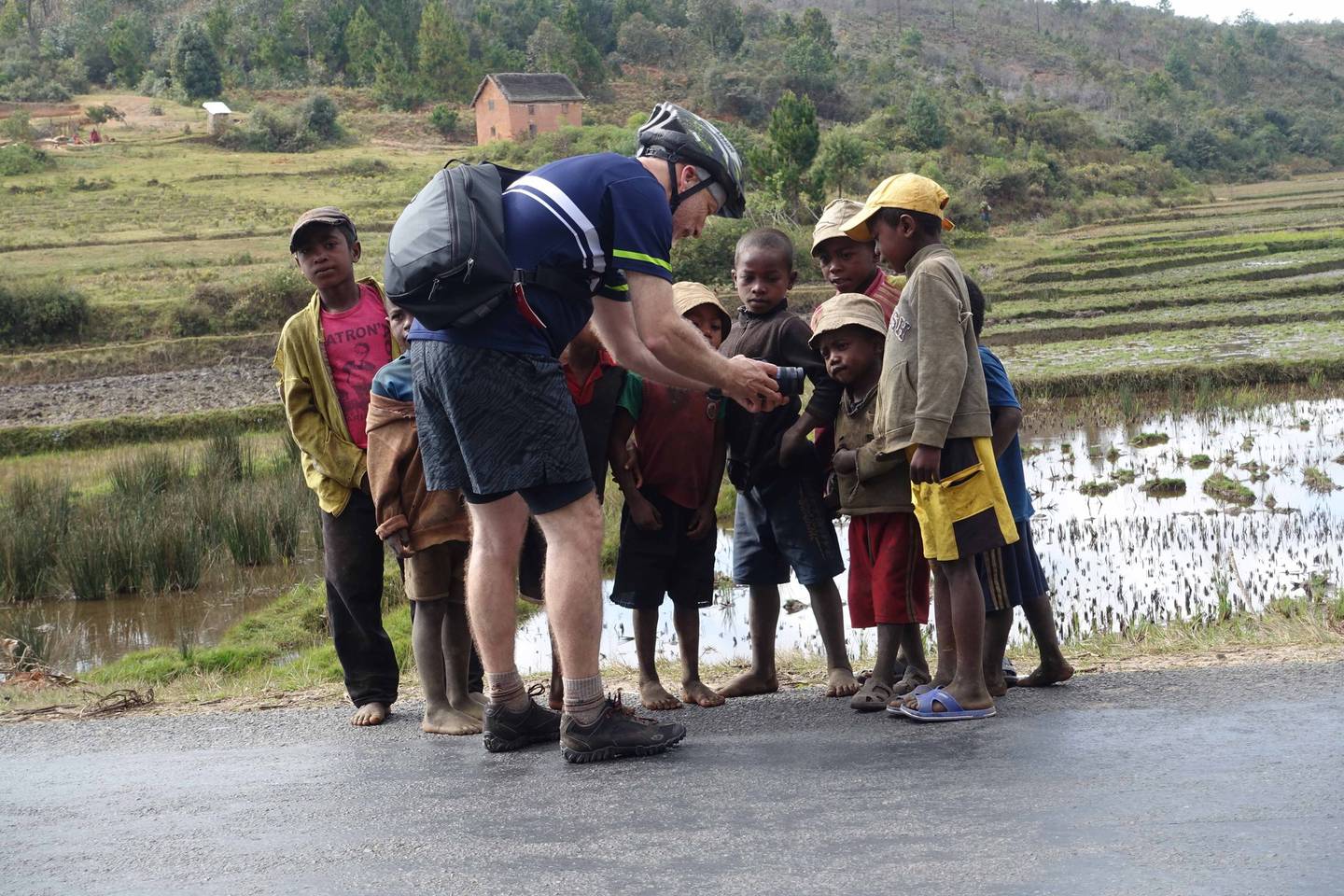 A SMALL WORLD AFTER ALL

One of the most unexpected things that ever happened to me was during the middle of winter while driving over a mountain pass in Spain in a Russian Lada. We were sliding around, we had no chains and I realised we would never make it over. I reversed all the way down and by the time we reached the bottom, it was pitch black and we had nowhere stay. Eventually we found an abandoned boarding school. We knocked and the caretaker said we could stay in the dorm, but there was already one other person there. We went in, put our bags down, and I went to say hi to the other person. It turns out I went to school with him. Sacred Heart was a real rugby school and this guy was now a ballet dancer in Berlin. Never in my wildest dreams did I see that coming.

“NOT TOO FAR FROM NEW ZEALAND”

In 1993, I was walking down Parnell Rise and, on a whim, I went into Budget Travel. The woman asked where I wanted to go. I looked at the map and put my finger on a place not too far from New Zealand. It turned out it was the Solomon Islands and the next flight was at six the next morning. I rang Audrey to say “I’m going” and she said, “fine”. I arrived in Honiara with no idea where I was going and caught a truck to the one hotel near the beach. In reception, the headline on the front page of the newspaper said: “Honiara: World Malaria Capital”. I had no idea. I still have the clipping. I did not get malaria.

At that same hotel, an old guy tripped and fell near me, so I helped him up and sat him down. He told me he was 93, from Argentina and had nothing at home any more. Everything was gone, so he sold his house and decided to travel until he died. Seeing his spirit and energy was a pivotal moment in my journey and I thought that’s what I want to do too. 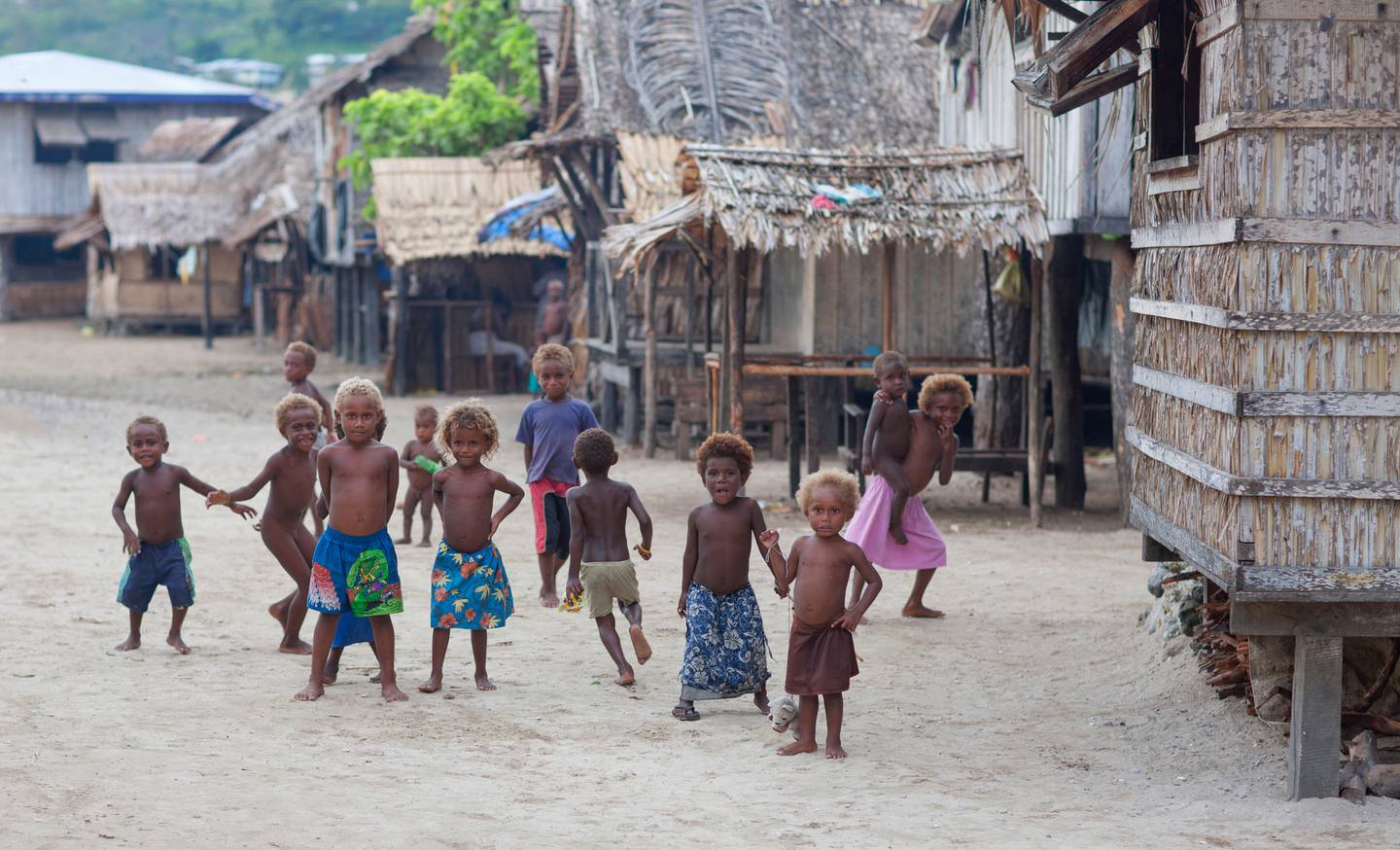 Who goes to Honiara and doesn’t go bush? I went to reception and asked for a guide to take me to the forest. The next day a man in a 4-wheel drive took me to the cusp of the forest. He pointed down a bank to two kids in the river, and said, “you go there”. These kids were about 12, they couldn’t speak English and they were my guides. All day we walked up river, these two kids and me, past houses on poles with pigs underneath, past women carrying things on their heads. We got to a huge waterfall. The kids climbed up, stood at the top, then jumped into the water below. They told me to do it. I stood and looked out at the forest, then I jumped and hurtled towards the water and thought, ‘Wow, does life get any better than this?’

Audrey’s mother sponsored a kid from the slums in Kenya. She put him through school, then he went to medical school and became a paediatric surgeon. I emailed him and said I wanted to visit Kenya to do something useful. He put me in touch with agencies that finance cleft palate operations. Untreated, these kids are stigmatised and don’t stand a chance. I now travel all over Kenya taking photos of kids before, during and after their operations. I interview the parents and write their stories for the agencies to raise funds. You go to a place like Kitale, the hospital runs with the bare minimum of equipment, paint is peeling off the walls, there aren’t proper beds, a guy is pumping oxygen by hand. Five or six nurses and one surgeon stand over a tiny baby and, in a half-hour operation, they change the course of that kid’s life forever.